sketcher: An R package for photo to sketch effects

By using the sketcher package, you can convert a photo into a line drawing image.
Drawing style (lineweight and inclusion/exclusion of shadow/shading) can be controlled.
Some examples (source photos and generated sketches) are shown below.

Details of this package are described in the article below:

The package is available on CRAN. It can be installed with:

Then, attach the package.

To install the development (latest) version of the sketcher package via GitHub, you can use the devtools package.

The sketcher package has a built-in image, which is useful when you want to try sketch effects right away. The image is named face.

Internally, this is just a numeric array of size 600 x 460 x 3 [y-coordinate, x-coordinate, color channel]. Each element of the array represents a pixel value, which can range between 0 and 1.

To plot an image, use the plot() function. 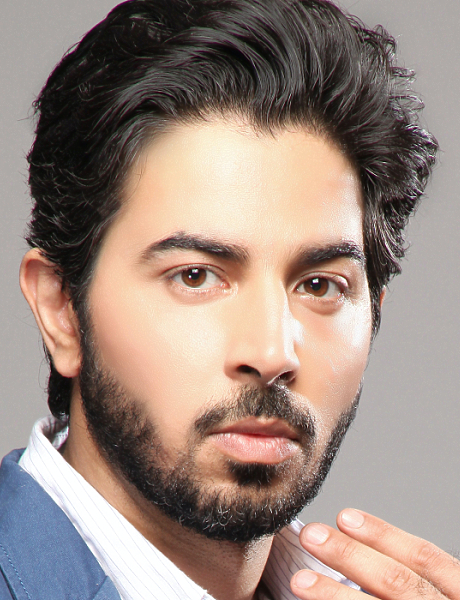 (In examples below, I actually used this image, which has higher resolution than the image provided by the package. Sketching results will be similar, but in general aesthetically more pleasing results can be obtained with images of higher resolution, at the cost of processing time.)

To load your own image, use the im_load() function.

The jpg, png, and bmp formats are supported.

You can load an image from the web (URL). For example,

will load a high resolution version of the face image noted above (compare dim(face) and dim(im)).

Use the sketch() function to apply the sketch effect. 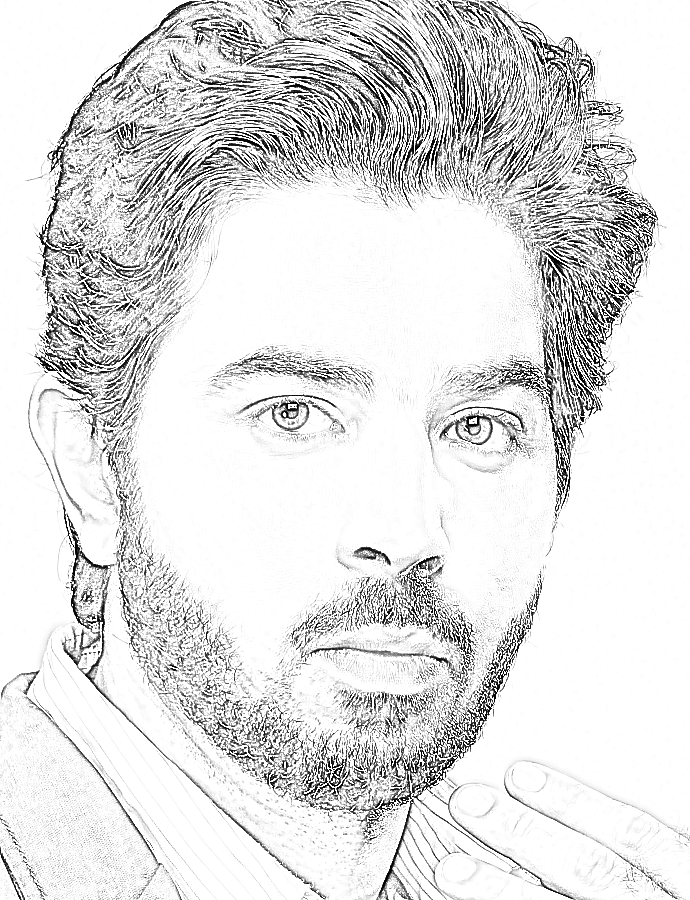 The sketch() function has several parameters to control the style of sketch.

Arguments of the sketch() function

A table of arguments of the sketch() function:

- im: an image, obtained by using the im_load() function.
- style: while style 1 focuses on edges, style 2 also retains shading.
- lineweight: as the name suggests. set a numeric value equal to or larger than 0.3.
- smooth: noise/blob smoother. set an integer value equal to or larger than 0.
- gain: this parameter may be useful for noise reduction in the dim region of a photograph.
- contrast: contrast of the sketch image is adjusted by this parameter.
- shadow: if given a value larger than 0 (e.g., 0.3), shadows are added to sketch.
- max.size: the size (image resolution) of output sketch is constrained by this parameter. if the input image has a very high resolution, such as 20000 x 10000 pixels, sketch processing will take a long time. In such cases, the algorithm first downscales the input image to 2048 x 1024 pixels, in this case, and then apply the sketch effect.

The effects of these parameters on sketch appearances are described in detail below.

Use the im_save() function to save an image.

By default, an image is saved in the png format. When using format = "jpg", you can set the quality of jpg compression (default is 0.95).

The effects of sketch parameters

The most important parameters of the sketch() function would be style and lineweight.

While style 1 is good at extracting fine edges, style 2 retains shading, as shown in the figure below. Note that the shading gets more salient when lineweight is given larger values. 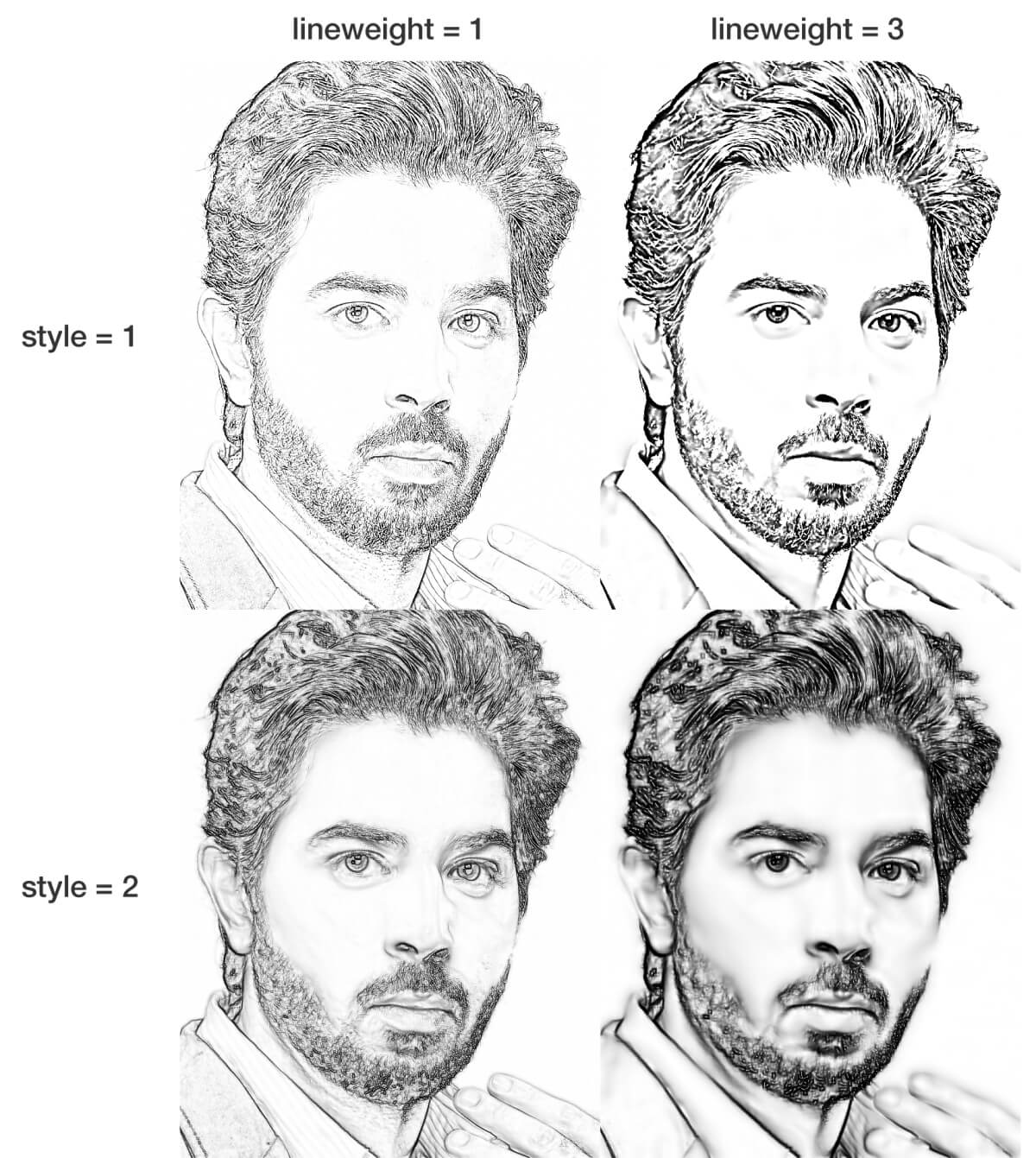 The smooth parameter controls the degree of smoothness of image texture. By increasing the smooth value, fine-scale edges, noises, and blobs are eliminated (see the figure below). 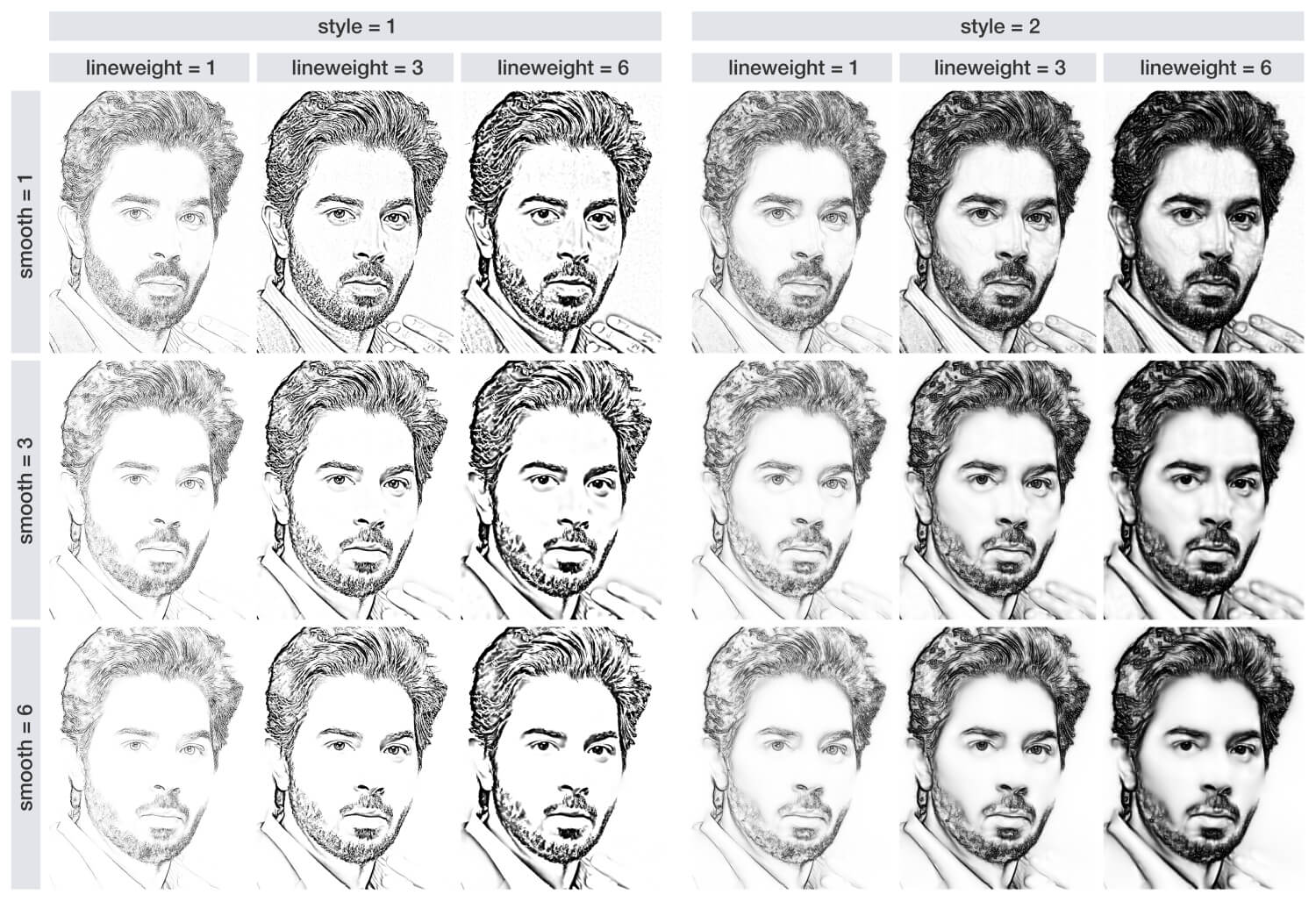 A constant value (gain) is added to an input image before the extraction of edges to produce a sketch. A sketch can be very noisy at dark/dim regions of the input image. In such cases, increasing the gain parameter, such as gain = 0.2 or gain = 0.3, may reduce the noise. In most cases, however, you don’t have to care about this parameter.

By increasing the contrast parameter, a sketch is darkened. When a sketch appears whitish, you may need to increase the contrast value.

Shadow can be added to a sketch by using the shadow parameter. By default, the sketch function does not include shadow (shadow = 0). In many cases, however, adding shadow will be needed to produce a reasonable result (described later).

Outline is missing and texture is lacking in the default sketch. By using style 2 and adding shadow, sketch(im, style = 2, shadow = 0.4), the problems are largely solved. In addition, by setting the smooth parameter to 0, sketch(im, style = 2, lineweight = 1, smooth = 0, shadow = 0.4), the sketch succeeded in representing the fine texture of the bird body (click/tap and enlarge the image below to see the effects).

Due to the lack of edges in the dark region of the face, the default sketch, sketch(im), produced a weird result. This can be fixed by adding shadow, such as sketch(im, shadow = 0.4). Finding the right value of the shadow parameter usually requires trial and error, but usually a value between 0.3 and 0.6 will produce a reasonable result.

The sketch algorithm detects edges in an image. If objects have unclear edges/outlines, sketching will fail. This typically happens when a photo contains 1) out of focus regions or 2) objects with unclear outlines such as furry animals.

A cat image below is such an example. The background of the photo and the lower body of the cat is out of focus, and the outline of the cat is blurry. The default sketch, sketch(im), was unsuccessful in representing the cat body. Zero smoothing, sketch(im, smooth = 0), enabled capturing the hairs/textures of the cat to some extent, at the cost of increased noise in background, and still the body and legs of the cat is not represented well. Unfortunately, there is no simple solution to the difficulty with blurred/defocused images.

Here are some sketches produced by the sketcher package. 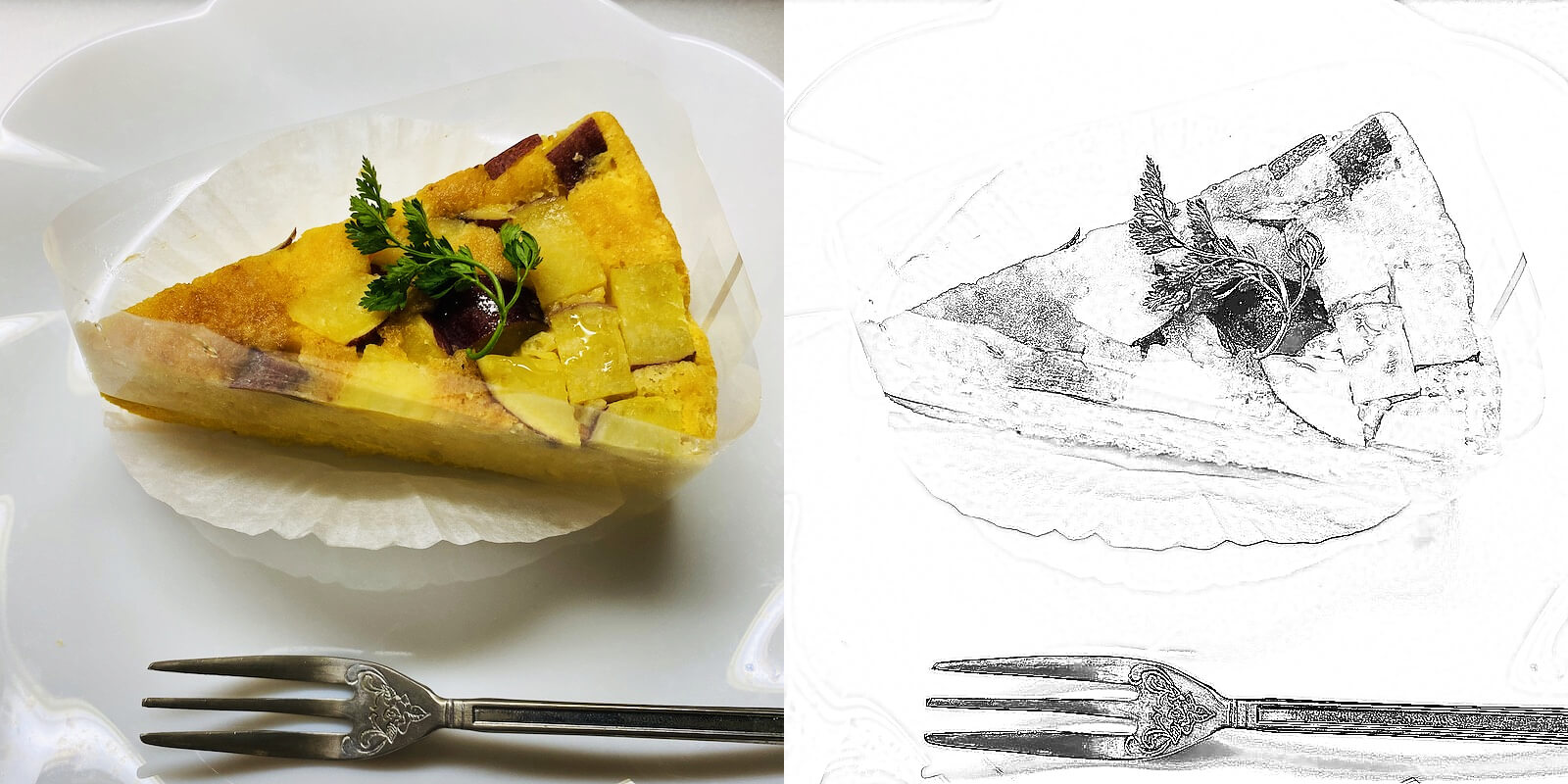 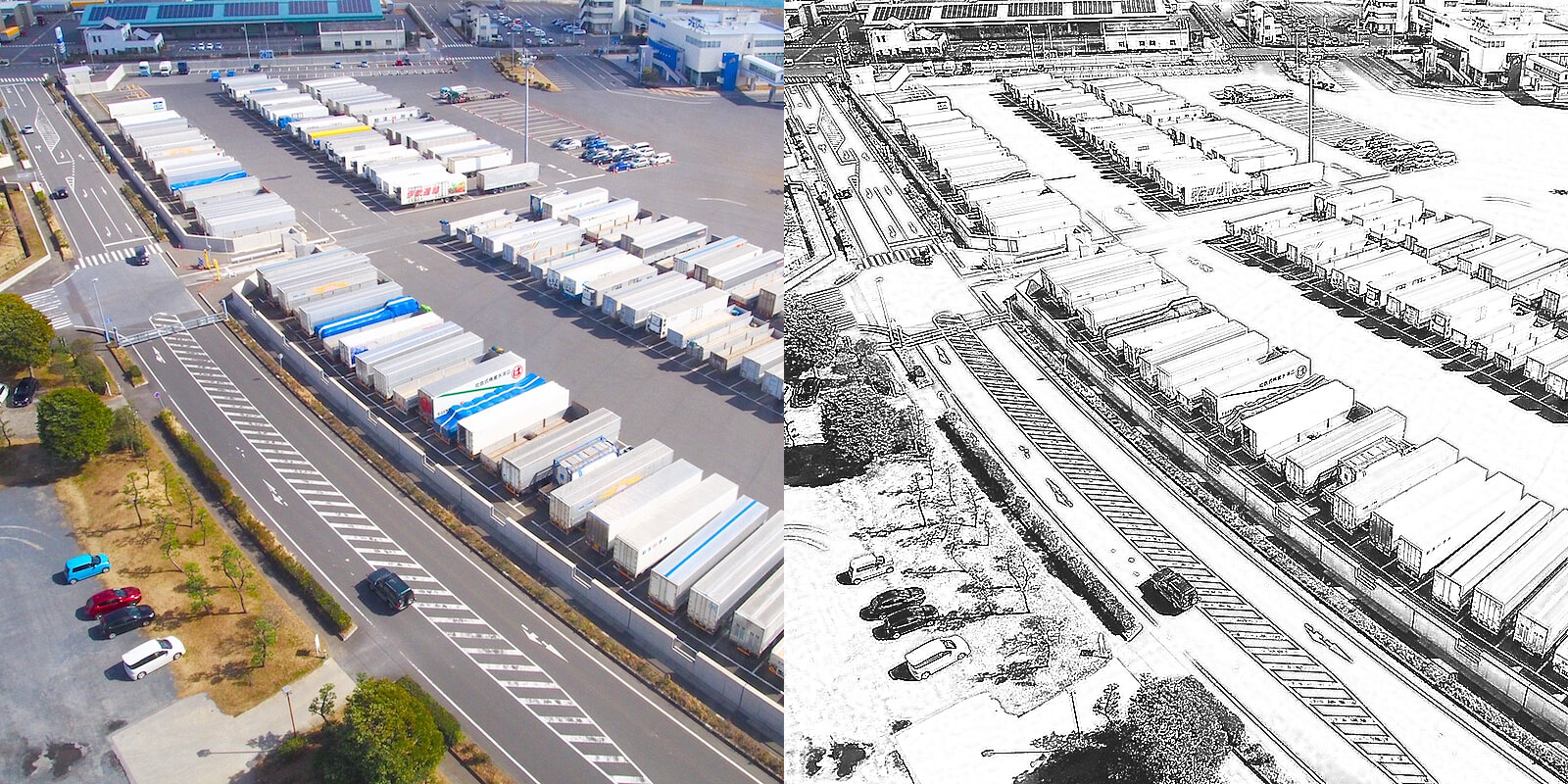 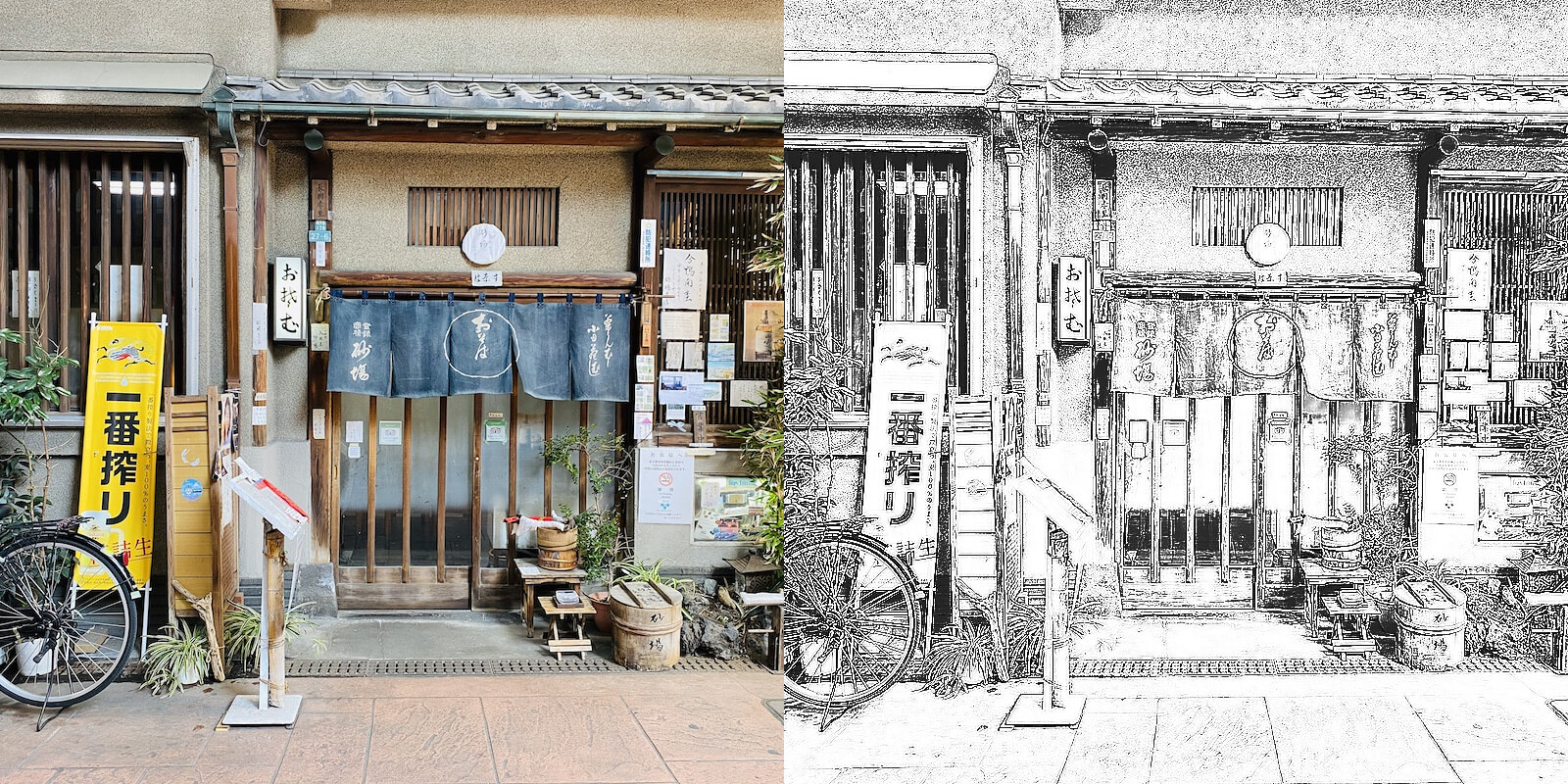 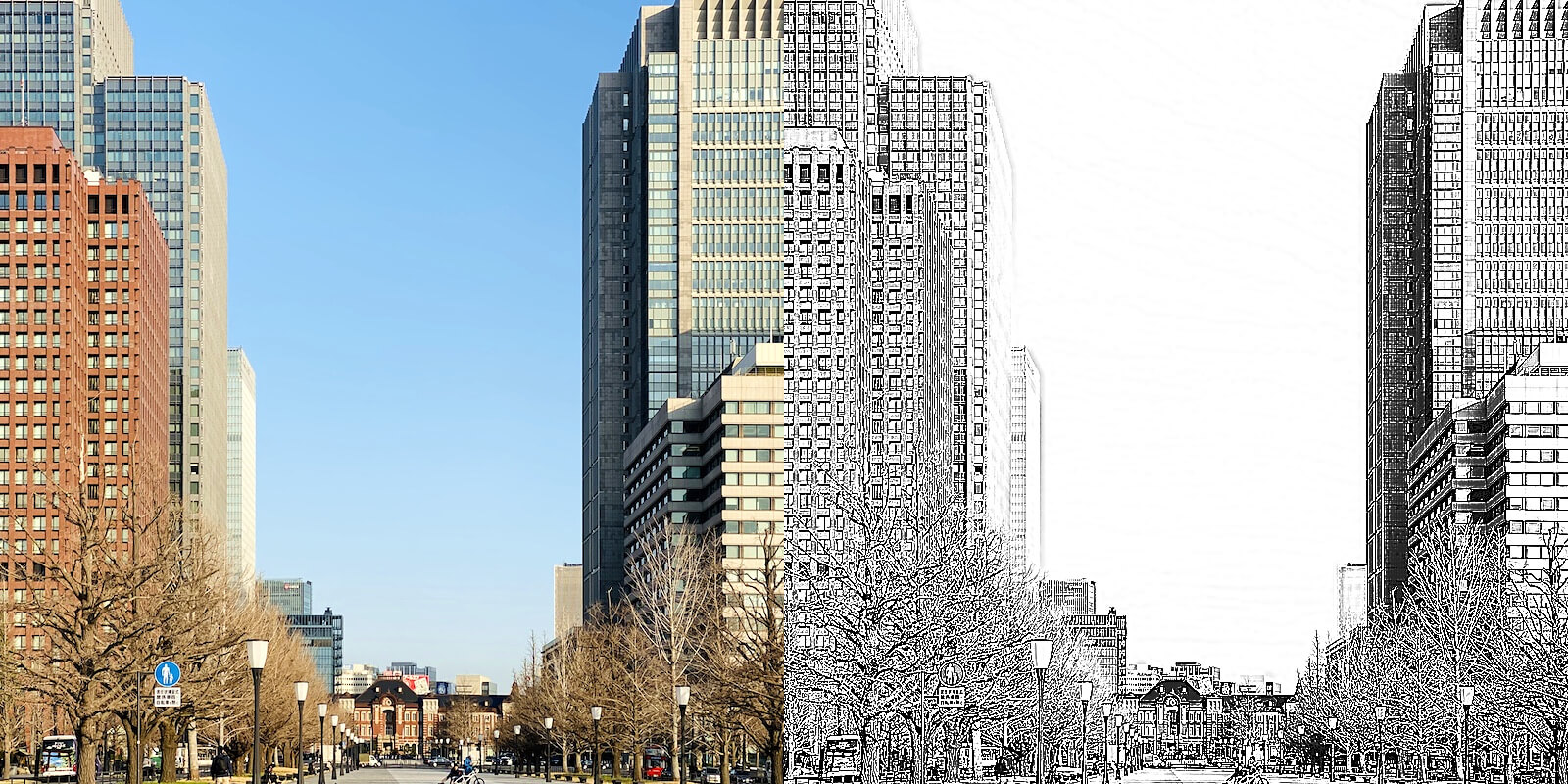 The code of this package is available on my GitHub page:
https://github.com/tsuda16k/sketcher